Normally this is where I would write something pithy or come up with a few quick witted analogies to get the cerebral party started.

Let’s save that for another time. Let’s get to it.

Barron Trump is off limits. Leave the kid alone.

If you don’t like his dad, cool, that’s your choice. It has always been a hard and fast rule that you leave the children of the President alone. 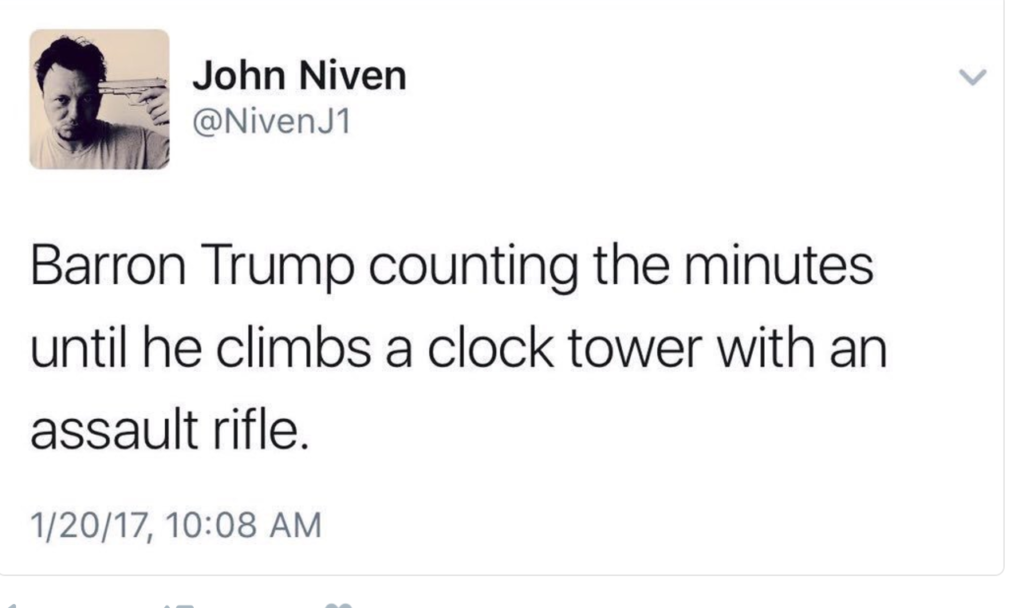 Since the election and over the last 72 hours, the amount of horrible tweets and comments about Barron on social media has been abhorrent (look it up). 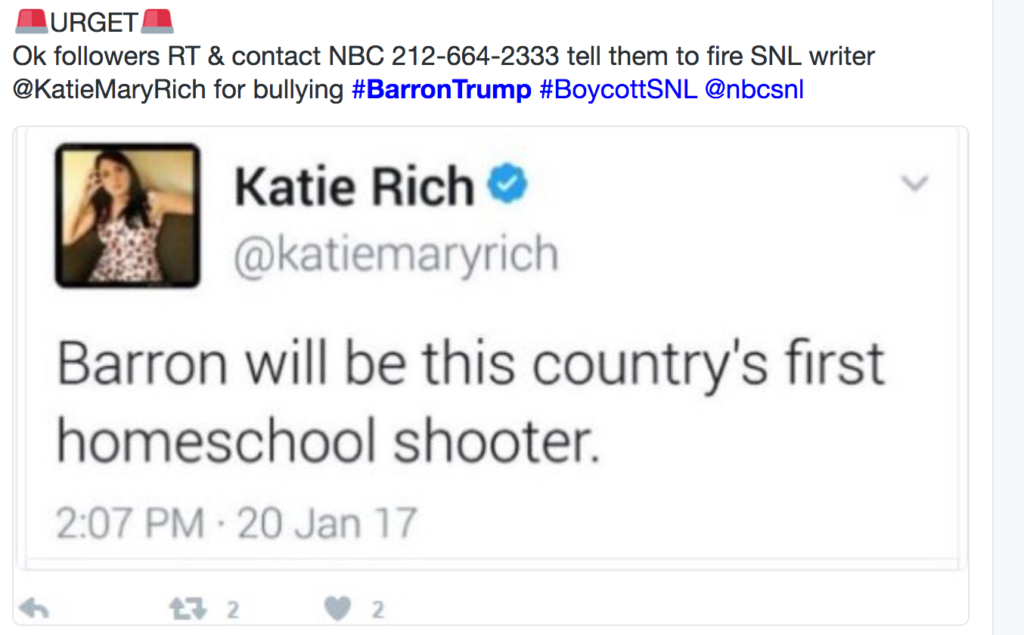 Stop, pause, and take in the fact that an adult said this about a ten year old boy. A little boy. How is she still employed? By the way, if you’re interested the main number for NBC in New York is 212-664-2333.

On election night, when President Trump, yes he’s the President of these United States, walked onto stage to deliver his acceptance speech Barron was in the background looking disengaged to say the least.

This sparked a world wide conversation if Barron is on the Autism Spectrum? Let me give you the 100% honest answer. None of your fuc*ing business. Leave the kid alone.

“He’s staring at the floor!” Maybe, just maybe he’s scared sh*tless. Step away from your computer, walk out into the hot lights of the public eye and see how you fare. It’s enough to make grown men crack, see Ben Carson. Why should a ten year old boy be able to handle that kind of pressure?

Why isn’t Trump taking the time to talk about Autism? Shut up. If he did say in fact “Barron is on the spectrum” half of you would applaud him while the other half would crucify him for being a horrible father and making him deal with all that over stimulation and using Barron as a pawn to gain sympathy and votes.  Because that’s where we are.

It goes back to being none of our business. You want to fight about something, google, “Chelsea Clinton in a bathing suit.” Should she be wearing a bikini? Is she confident or showing too much skin? Does the cut say “ I am brave and proud!” or “Kim K, check it out!”? What about the color, is blue good for her skin tone, maybe when she’s dry, but wet, is it just too much?

When I was ten, I was mastering riding my bike with no hands and learning how to spit like Dave “King Kong” Kingman (look it up), not having to worry about cameras in my face and awful people making memes about me.

As far as President Trump goes, walk, protest, riot, call your congressmen, burn your bras, un-friend me on Facebook, let your freak flag fly. It’s your right. BTW- I didn’t vote for him.

Making fun of a little boy, who may or may not have special needs is a class A Douche Bag Felony.

Don Jr, the other guy, Tiffany and Ivanka (the first female president BTW) go for it. They are adults and fair game. I’ll start- Their hair is a birth defect! Ha!

The kid. Nope, never, back off. In 8 years, when his sister is running for President and he’s 18, he’s all yours, until then… Leave Barron Alone.