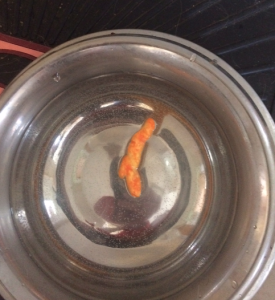 I am not sure of there is a singular of Cheetos, is it just Cheeto? Spell check doesn’t think so.

Anyway, last week I had all of the kids home, which meant there was no time to think, let alone do anything for myself.  I have three great kids, but when you get them alone in the house, it can get loud, needy and crowded, quickly.

It’s a balancing act between my patience and sanity on a pinhead of exhaustion.  One thing goes wrong and everything topples over.  Most days, it’s a teeter-totter but I keep things in check without too much damage.

Until the Cheetos incident.

It was later in the day and despite the fact that kids had been fed several times, I had yet to really eat or shower or even poop alone, I finally found my moment of complete and absolute aloneness, where they were all pre-occupied with something or someone else.

I was walking from the kitchen and grabbed a handful of Cheetos when the biggest one, you know that huge Cheeto that looks like a tasty orange finger, slipped out of my hand and into the dogs water bowl!

It sat there floating like a big tasty orange steamship of yummy, mocking me.  Sure there were other Cheetos in my hand, but they were the lesser, smaller understudy Cheetos that fill the cracks between the big mommas of flavorful love.

I wanted that Cheetos, I could feel my blood boil as it bounced around the dog dish, mocking me “bet you won’t!  Bet you won’t reach down into this bowl of germ filled dog slobber and…….!”

That was all that I could take.  Yes, I did. I reached down into the dog dish, I grabbed my drowning snack like a Coast Guard rescue swimmer and slammed it into my mouth!  Soggy and satisfying, I had won!

I am not normally in the habit of munching from the dog dish, however it was the principle. I needed one thing, one small thing to go my way.  My kids dictate when I get up in the morning, I am borderline illiterate, because instead of watching or reading the news I watch Caillou and read Walter the Farting Dog…over and over again. I am a taxi, a short order cook and an as& wiper all at the demands of other people.

I hardly ever get things “my way!” When that beautiful chunk of flavor goodness fell from my grasp it was the last straw! I couldn’t even eat junk food the way I wanted! The teeter-totter had flipped over and everything my sanity went flying.

As I sat in my post Cheetos haze, it made me realize that part of being a good parent is being good to myself.  You “organic people” will argue that Cheetos aren’t the best way to treat myself right, but at that moment it was.

It’s not selfish, it helps keep me calm, keeps the teeter-totter from tipping and keeps me out of the dog bowl.