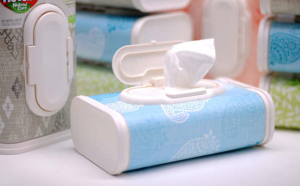 DAD tries to watch the Today show every morning for a few reasons:

A. I think they do a great job.

B. Natalie Morales is at the top of my “list.”  She could be reading about the world ending and I would be slightly aroused.  Can you think of a better way to start the day than with good information, a cup of coffee and morning wood?  I can’t?

Anyway On Tuesday’s show (January 14, 2014) Natalie was talking about a new finding that links baby wipes to diaper rash in some children.

According to a new study published Monday in the journal Pediatrics, some infants and adults, might be allergic to a certain preservative in baby wipes called methylisothiazolinone.

We have wipes in every bathroom in the house. For the kids. For me. To freshen up after watching the Today show, an allergic reaction down there on any of us would be uncool.

“Baby wipes are behind some cases of rashes often diagnosed as other, more serious conditions like eczema or psoriasis” says Mary Wu Chang, a professor of dermatology and pediatrics at the University of Connecticut who wrote the study.

“Wet wipes are increasingly marketed in personal care products for all ages, and [methylisothiazolinone] exposure and sensitization will likely increase,” she wrote. “Dermatitis of the perianal, buttock, facial, and hand areas with a history of wet wipe use should raise suspicion of [allergic contact dermatitis] to [methylisothiazolinone] and prompt appropriate patch testing.”

According to NBC News, Chang was first started making the connection to the baby wipes’ causing rashes after an 8-year-old patient had red, scaly skin around her mouth came to the University of Connecticut School of Medicine for answers. Chang treated the child with antibiotics and steroids, which cleared up the bizarre skin irritation temporarily, but the rash continued to resurface.

“I think it may be more common than people realize,” Chang told NBC News.

It doesn’t mean we all need to ditch baby “wipes for something else “wipes are “extensively tested” and are generally regarded as “innocuous,” and that allergic reactions to them are few and far between” says Chang.

“They’re so convenient,” Chang told NBC News. “I have three kids, so I know how hard it is to do the changes, especially when you’re traveling. But maybe when you’re at home, it would be better to use a gentle cleanser and water. That way you minimize exposure.”

If you think your little poop machine may be allergic to wipes, it’s not like you are SOW (Sh&t Out of Wipes)you can use moist towels to clean it up “down there,” find a wipe without methylisothiazolinone or kick in that potty training a few years earlier.  Here’s a link to step by step instructions on how to make your own wipes.

Here’s a link to DAD’s Facebook page, remember to click on it and Like the page.  It has been known to make you smarter and better looking.